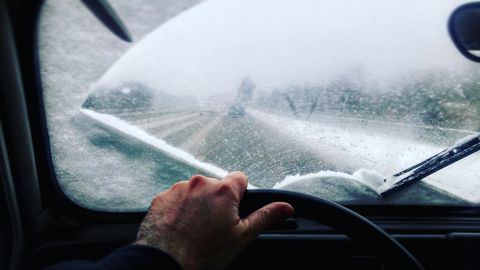 When winter arrives, the last thing you want breaking down is your car's heater because not only is a frosty car inconvenient—it's also dangerous.

A broken heater in the winter is far worse than malfunctioning A/C in the summer. This genuinely becomes a safety hazard because heat is needed to remove ice and fog build-up on your windshield—not to mention that extreme cold for extended periods is extremely dangerous.

So what happens if your car heater zonks out in mid-January? Here are a few things to try before heading to the mechanic.

Items You Need In Your Car This Winter

This is a two-for-one space saver as this jump starter from Anker also serves as a battery back for smartphones. It's always good to have some extra juice on hand.

Compact and sturdy, this shovel for SOG should be more than enough to help dig your car out of any snowy conditions.

If your car gets stuck and your heater doesn't work—you're in serious trouble. This blanket will help keep you warm until help arrives.

If you're having trouble getting the ice off your car, this will help things along.

How Your Heater Works

A car’s cabin will heat up as the engine’s coolant heats up. The coolant absorbs the heat from the engine, causing it to become hot. This coolant is then routed through a “mini” radiator called a heater core. This heater core then passes the hot air it generates into the vehicle with a blower fan.

Many different things can go wrong here causing the whole system to work poorly or not at all. Checking to make sure the engine warms up properly is number one on the list. When driving, an engine typically takes about 5-10 minutes to reach its proper temperature.

Thermostats are a common wear item, and typically break open, so it’s always allowing coolant to flow through the engine. This will make it incredibly difficult for the engine to heat up in cold temperatures since it’s constantly being cooled. If the thermostat breaks closed, then you’ll have overheating problems, but they’re not designed to break that way.

Replacing a thermostat is a relatively easy DIY project on some cars but can be difficult on others. If the car does get up to temperature as it should, there’s probably something else that has gone bad.

Buildup of grime is fairly common in coolant systems, so there could be a restriction somewhere. If the holdup is by the heater core, then that’s one reason why hot air isn’t blowing. Fixing this can be as simple as a fluid flush. You’ll want to flush it several times with water to get all the sediment and build-up out of the heater core or blockage area.

Become a Car Yoda
Choosing the Right Coolant for Your Car 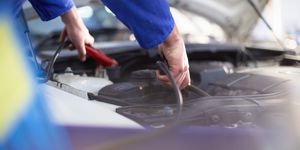 A different reason for the heat to not work would be a lack of coolant going through the engine. This will cause plenty of other issues, but there won’t be enough coolant to sufficiently warmup that heater core as well. Coolant doesn’t just disappear though, so there’s a leak in the system somewhere that you want to find sooner rather than later.

One of the more obvious problems would involve the blower fan not pushing any air out of the vents. If the fan has broken, then there certainly won’t be any warm air from the heater core coming your way.

It’s not always easy to diagnose heater problems. Sometimes it can cost up to four figures if you have a bum heater core, other times it’s as easy as a broken switch or dial on your dash. Whatever it may be, consulting forums specific to your car and speaking with a mechanic should help set you on the path of being warm and happy again.

Zachary Palmer Zac Palmer has been a car geek since he knew what a car was, and he doesn’t plan on switching hobbies any time soon.
This content is created and maintained by a third party, and imported onto this page to help users provide their email addresses. You may be able to find more information about this and similar content at piano.io
Advertisement - Continue Reading Below
More From Essential How-To
10 Easy Ways to Winterize Your Home
How to Winterize Your Lawn Mower in 9 Easy Steps
Advertisement - Continue Reading Below
How to Clean a Cast-Iron Pan
The Amazing Math Inside the Rubik’s Cube
Pop Mech Pro
How to Carve a Pumpkin Like a Pro
7 Things to Do With Your Leftover Paint
How to Get Rid of Pesky Mosquitoes in Your Yard
5 Ways to Cool Down a Room (Without Blasting AC)
How to Clean Your Headlights and Make Them Shine
How to Fix Dry Grass and Brown Spots on Your Lawn