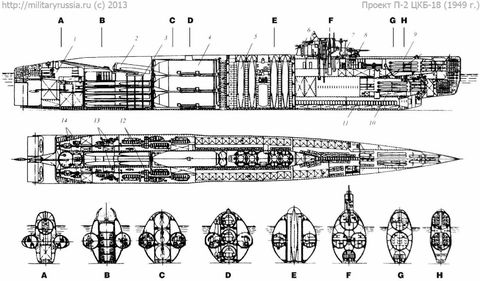 The K-2 submarine, designed as the Soviet Union’s next generation heavy submarine, would have combined many of these technologies into a weapon worthy of a James Bond villain. From V-2 rockets to tank-carrying midget submarines, the super sub could have done it all. Although the K-2 class was never built, it remains a window into the triumphant visions of the Soviet Union and Stalin itself in the aftermath of the most destructive war in history.

In the aftermath of World War II, both the U.S. and the Soviet Union raced to recover Germany technology in a variety of military fields, including submarines and rocketry. The American effort, known as Project Paperclip, followed the Allied forces on the Western Front as they swept into France, the Low Countries, and eventually Germany itself, capturing technical documents, working equipment, and even the scientists and engineers that worked on these secret projects.

In an article on his Covert Shores website, submarine expert HI Sutton explains the Soviet effort to use many of these captured technologies to build a super submarine.

In 1949, Soviet designers proposed a submarine that incorporated a number of these technologies. The sub, known as K-2, would be 367 feet long, 41 feet wide, and displace approximately 5,360 tons, making it easily ten times larger than wartime submarines constructed just four years before. K-2 had a crew of 100, a maximum operating depth of 656 feet, and a maximum speed of 17 knots underwater.

The K-2 itself, Sutton explained to Popular Mechanics, was heavily influenced by the revolutionary German Type-XXI U-boat of World War II. The Type XXI was the most advanced submarine fielded by any country during the war, and details of the submarine had fallen into Soviet hands.

K-2 was also armed to the teeth, almost comically so. “The submarine was massive for the time,” Sutton says, “with sixteen torpedo tubes in three separate torpedo rooms (two forward, one aft), all with reloads. This compared to ten on U.S. Navy fleet submarines of this time, and just four on later U.S. nuclear-powered attack submarines.”

Each fired ET-46 torpedoes. It also featured two pairs of anti-aircraft guns, both 57-millimeter and 25-millimeter, for fending off sub-hunting aircraft. All of this was pretty standard for submarines of the late 1940s.

Amazingly, the torpedoes and guns were actually K-2’s secondary armament. Primary armament consisted of no less than 12 R-1 (NATO code name: SS-1 “SCUNNER”) ballistic rockets, copies of the German V-2 rocket, in a large payload bay. Alternately, the payload bay could accommodate up to 41 10X (“SWALLOW”) cruise missiles, copies of the German V-1 cruise missile. Alternately, for a completely different role it could nine midget submarines, each carrying tanks for amphibious invasions.

“P2 was the height of ambition of Stalin's navy,” Sutton explained. “It combined the latest submarine design learnings from World War II with the latest missiles. Until the Soviets captured Nazi German technologies at the end of World War Two, they did not have access to such advanced missile concepts.”

Why would Russia build a submarine suitable for wildly different goals as bombarding countries with rockets and cruise missiles versus landing amphibious forces?

“The ability to depot tank-carrying midget submarines shows the confused state of Soviet requirements," says Sutton. "Transport submarines and use of submarines firing amphibious operations was seriously considered on both sides of the iron curtain, but mixing amphibious transport and missile strike capabilities in a single submarine is difficult to explain.”

One possible explanation for the do it all super sub: Stalin himself. The Soviet leader, like Adolf Hitler, had a tendency to meddle in military decision making, and his megalomania could have persuaded him to pursue such an idea.

Alternately, the Soviet Navy could have pitched the submarine as a wonder weapon to help ensure it was funded. The more useful a weapon is in a variety of roles the more likely it will stand out as worthy of state funding.

Soviet progress in missile submarines wisely went a more incremental route, leading to monsters such as the Typhoon and Oscar classes in the 1980s—submarines that were several times bigger than K-2.