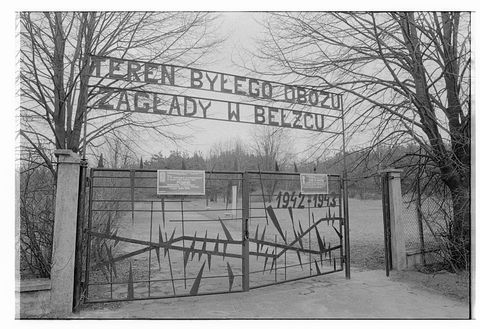 The study of mass killings can often lead to a conundrum—the numbers associated with the worst genocides in history can often be so staggering that it's difficult to fully appreciate the actual devastation. A new paper from a mathematical biologist attempts to absorb and quantify some of the most highest rates of systemic murder in human history during the Holocaust. A quarter of all Holocaust victims, he finds, were murdered in a period of just three months.

The study, by Lewi Stone of both Israel's Tel Aviv University and RMIT University in Australia, examines the logistics of making such levels of murder even possible. Its origins start in Operation Reinhard, the overarching Nazi mission to kill all Jews within German-occupied Poland.

The Holocaust was made possible in large part through the astonishing Nazi infrastructure dedicated to Jewish murder. The German national railway, known as the Reichsbahn, "employed almost half a million civil servants and 900,000 workers, who were made available for the job," Stone says. These train systems were enhanced through new technology supplied by Dehomag, a German subsidiary of IBM. Using punch card technology originally designed for census-taking, the Nazi infrastructure of death was able to take on an infamous efficiency.

A map from February 1944 showing the extent of the Nazi infrastructure within Poland. Killing centers like Sobibor and Belzec were located to the south of Warsaw.
Galerie Bilderwelt/Getty ImagesGetty Images

Reinhard, which officially began in March 1942, would force this infrastructure to its breaking point. Underpinning 480 special train missions from 393 separate Polish towns, the Nazi infrastructure pointed toward a variety of death camps. Different from concentration camps like Auschwitz, which often forced Jews and other victims into a variety of forced labor, these killing centers were focused primarily on applying the concept of the assembly line onto mass murder.

Starting in March, a variety of killing centers opened including Belzec, Sobibor, and Treblinka II, separate from the original concentration camp known as Treblinka. Kurt Gerstein, an SS officer who later provided evidence for the Nuremberg trials, recalled that on August 15, 1942, Hitler had grown unsatisfied with the pace of killing. “Fuhrer ordered all action speeded up!” he wrote in his notes.

Stone's new analysis shows that the Nazi infrastructure within Poland responded to Hitler's demands with a fury of new activity. Death totals skyrocketed in an intense 105-day period from mid-August through mid-November, resulting in the murder of approximately 1.47 million Jews.

Putting this number into context, Stone compares these numbers to another of the 20th century's atrocities: the Rwandan genocide of 1994. Stone finds that in Operation Reinhard, Nazis were able to kill at a rate 83 percent higher than the Hutu militias. It's a juxtaposition that serves to highlight the extremity of the Nazis' crimes, but which comes at the risk of diverting focus from the fact that genocide is deeply evil regardless of scale.

Reinhard was perhaps the most brutally efficient killing operation in human history. As the year wound down, Reinhard, whose victims also included local Poles, Soviet prisoners of war, and Roma, closed down after an uprising at Sobibor partially destroyed the camp.

On September 1 this year the world will commemorate the 80th anniversary of the Nazi invasion of Poland, which heralded the beginning of World War II in earnest. While Stone's report is shocking, it's a necessary reminder of how human infrastructure can become a weapon deadlier than any bomb.

David Grossman David Grossman is a staff writer for PopularMechanics.com.
This content is created and maintained by a third party, and imported onto this page to help users provide their email addresses. You may be able to find more information about this and similar content at piano.io
Advertisement - Continue Reading Below
More From Military
Restoring a Wooden WWII Fighter Plane
Pop Mech Pro
Drug Smugglers Have Their Own 'Narco Subs'
Advertisement - Continue Reading Below
USS Thresher Was Doomed From the Start—Here's Why
Man Wedges Anti-Tank Shell Up His Butt
The CIA Once Wanted Dolphins to Sink Enemy Ships
Could U.S. Missiles Tip a War in Ukraine’s Favor?
How the U.S. Military Could Intervene in Ukraine
Video Explains Why UN Must Ban “Slaughterbots”
Pearl Harbor Still Holds a Few Mysteries
What a Russia-Ukraine War Could Mean for the U.S.