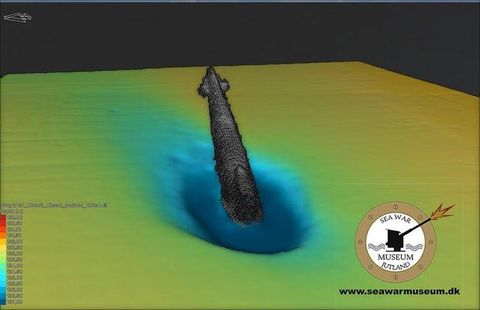 Researchers in Denmark claim to have found German U-boat U-3523, bringing an end to a mystery surrounding the Nazi surrender in Europe at the end of World War II. The submarine, missing for decades, was rumored to have escaped to South America, and while its discovery proves that was not the case, its contents are still unknown.

In May 1945, Nazi Germany surrendered to Allied Forces across Europe. On April 30th Adolf Hitler had committed suicide, and within seven days the Nazis had surrendered in Italy and Berlin. On May 5th, German forces in Holland, northwest Germany and Denmark surrendered. It in the Netherlands it is currently celebrated as Bevrijdingsdag, or Liberation Day.

At this point, with German soldiers and officials in disarray and killing themselves en masse, it was unclear what a U-boat known as U-3523 was doing 10 nautical miles off the coast of Denmark. On May 6, a British RAF bomber dropped depth charges and sank it, killing all reported 58 hands.

Even before its mysterious final voyage, the U-3523 was a rarity. It was a working Type XXI, also known as "Elektroboote." The brainchild of Hellmuth Walter, a German engineer also responsible for rocket engines in the Messerschmitt Me 132, the Type XXI would radically change the development of warfare in the open ocean. Since the 1930s Walter had proposed that U-boats be powered with electric motors and that their energy come from storage batteries.

The Type XXI, alongside the later XXIIIs, were the culmination of his work. Powered by 2 diesel engines and 4 electric motors, Type XXI submarines were the first in history that could maneuver for extended periods of time while submerged, up to several days. From a hull design giving sailors more space to higher diving speeds, it emerged as the clearly superior submarine of its day. Only four were made due to errors in production, but after the war, Allied forces based submarines on XXI designs for decades. Both Soviet Whiskey-class and American Tang-class submarines used XXI designs.

The world’s only remaining Type XXI U-boat, on harbor at the German Maritime Museum in Bremerhaven.
PicturePrinceFlickr

The sinking of the U-3523 brought with it more questions than answers. The museum that found it, Sea War Museum Jutland, says in its findings that after the war, "there were many rumors about top Nazis who fled in U-boats and brought Nazi gold to safety, and the U-3523 fed the rumors. The Type XXI was the first genuine submarine that could sail submerged for a prolonged time, and the U-3523 had a range that would have allowed it to sail non-stop all the way to South America."

The museum doesn't know what's exactly inside the ship. It's partially embedded 130 yards into the seabed off the coast of north Denmark, making excavation difficult. The museum says it has no idea what's on board: "nobody knows if the U-boat had valuables or passengers aboard in addition to the 58 crew."

A graphic representation of the sunken submarine in its current state.
Sea War Museum Jutland

That the ship had gone missing for so many years opened up theories that in fact it had reached South America successfully, but those theories can now be put to bed.

The museum has found 450 World War II wrecks. A month before worldwide celebrations over the end of the war, it's worth reflecting on the long arm of the conflict into this century. Recently, other elements in the Nazi navy were found to be hurting the Norwegian environment. And last year, a woman relaxing by the Elbe river in Hamburg found herself on fire thanks to World War II-era white phosphorous.

David Grossman David Grossman is a staff writer for PopularMechanics.com.
This content is created and maintained by a third party, and imported onto this page to help users provide their email addresses. You may be able to find more information about this and similar content at piano.io
Advertisement - Continue Reading Below
More From Naval Vessels
Drug Smugglers Have Their Own 'Narco Subs'
USS Thresher Was Doomed From the Start—Here's Why
Advertisement - Continue Reading Below
America Once Had a 'Concrete Battleship'
Why Taiwan Is Building Eight New Subs
Retiree Fakes Sub Steel Tests, Calls Them 'Stupid'
Why China Is Building U.S. Aircraft Carrier Models
New Documents Reveal Why the USS Thresher Sunk
China's Stealth Ships Aren’t So Stealthy After All
Why the U.S. Could Best China in the Indo-Pacific
Why Australia Broke its Submarine Deal with France