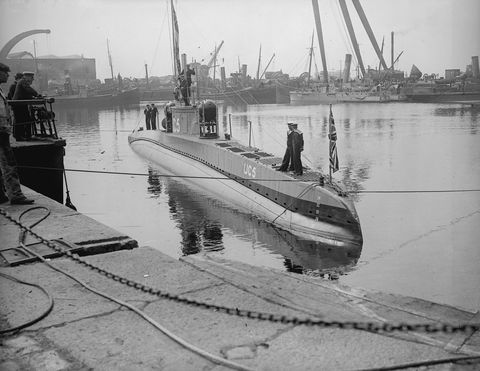 In 1917, visitors to New York City’s Central Park were greeted with a remarkable sight: a German submarine. And not just any submarine: this was the UC-5, a boat that had 30 ship sinkings to its name. Captured by the Allies, UC-5 was sent on a multinational tour designed to drum up support for the war.

Most people are familiar with the u-boats of World War II, but fewer realize Germany had tried an identical trick during World War I. A land power by nature, Germany was unable to divert enough resources to building a navy that could take on England. The solution: build hundreds of cheaper submarines that could choke off the United Kingdom from the rest of the world. Deprived of food, raw materials, and finished goods London would eventually capitulate, knocking the country out of the war.

The strategy didn’t work...twice. Although initially successful in both wars, anti-submarine warfare forces gradually became too good at chasing down German submarines. One such sub was the UC-5, a German minelayer submarine with an impressive war record.

Tiny by modern standards, UC-5 weighed less than 200 tons surfaced. She was designed to operate in coastal waters strictly as a minelayer, carrying twelve mines. UC-5 did not carry torpedoes. The sub was incredibly successful, sinking 28 commercial ships and two warships during her brief career.

In April 1916, UC-5 attempted to lay a minefield outside the port of Harwich. She ran aground and was intercepted by the Royal Navy as the crew was scuttling her. Captured as a war prize, UC-5 was chopped into three sections and then put on display in New York City. Each section was towed by a team of horses from the city’s waterfront to Sheep Meadow, where the sub was reassembled. The German u-boat was put on display for a war bonds drive, and those who bought bonds could tour the boat for free.

The u-boat's fate isn't completely certain, but it was likely scrapped after the war.