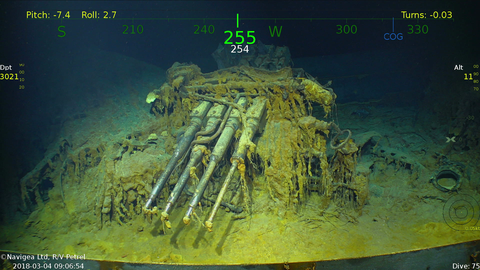 An expedition has successfully discovered wreckage from the USS Lexington, an early aircraft carrier that was sunk off the coast of Australia during World War II.

The expedition was led using the R/V Petrel, a research ship owned by Microsoft co-founder Paul Allen. The world's only privately-owned vessel in the world equipped to explore 6,000-meter depths, the Petrel had been exploring the Coral Sea hoping to find the legendary ship.

“To pay tribute to the USS Lexington and the brave men that served on her is an honor,” said Paul Allen in a press statement. “As Americans, all of us owe a debt of gratitude to everyone who served and who continue to serve our country for their courage, persistence and sacrifice.”

The Lexington was christened in 1925 and saw peacetime service on the west coast. In 1929, for example, the ship's four turbo-electric generators, each capable of producing 35,200 kilowatts, became the primary energy source for the city of Tacoma, Washington when its dams suffered through a drought. In the 1930s, the ship's forward flight decks were widened in anticipation of increased naval use of aircraft.

By World War II, these predictions had proven correct. Alongside the USS Yorktown, the Lexington took on three Japanese aircraft carriers in an entirely new form of naval combat. For the first time in the history of violence on the seas, the ships in combat were not even in visual range of each other. Rather, during the Battle of the Coral Sea they would fight by proxy through their planes.

Over two days, a combination of furious torpedo attacks and continual bombings from Mitsubishi A5Ms began to take their toll. The Japanese attacks caused a variety of explosions onboard, from ammunition lockers fragmenting to fuel tanks catching on fire. One explosion stuck the ship's siren in a permanent "on" position. Power began to fail on the forward half of the ship, fires forced the evacuation of the lower decks, and the ship started to drift in the water. More than 200 soldiers were killed.

After the order to abandon ship was completed and 2,770 men had reached safety, the USS Phelps was ordered to torpedo the Lexington and sink it. "There she goes," an officer told a reporter as the ship faced upright on its descent. "She is going down with her head up. Dear old Lex. A lady to the last."

“Lexington was on our priority list because she was one of the capital ships that was lost during WWII,” said Robert Kraft, director of subsea operations for Allen, in the press statement. “Based on geography, time of year and other factors, I work with Paul Allen to determine what missions to pursue. We’ve been planning to locate the Lexington for about six months and it came together nicely.”

Along with the aircraft carrier itself, several Grumman F4F-3 Wildcats and Douglas TBD-1 Devastators were also found in the wreckage.

The ship has been located 2 miles below the surface and 430 nautical miles off the coast of Queensland, Australia.

“As the son of a survivor of the USS Lexington, I offer my congratulations to Paul Allen and the expedition crew of Research Vessel (R/V) Petrel for locating the “Lady Lex,” sunk nearly 76 years ago at the Battle of Coral Sea,” said Navy Adm. Harry B. Harris Jr., head of the U.S. Pacific Command, in the press statement released by Allen. “We honor the valor and sacrifice of the “Lady Lex’s” Sailors — all those Americans who fought in World War II — by continuing to secure the freedoms they won for all of us.”

David Grossman David Grossman is a staff writer for PopularMechanics.com.
This content is created and maintained by a third party, and imported onto this page to help users provide their email addresses. You may be able to find more information about this and similar content at piano.io
Advertisement - Continue Reading Below
More From Archaeology
If We Find Fossils On Mars, They Could Be Fake
Russia Wants to Clone an Army of Ancient Warriors
Advertisement - Continue Reading Below
Breakthrough: Scientists Sequence DNA From Dirt
Newton Believed Pyramids Held Apocalypse Secrets
Is This Jesus's Childhood Home?
Archaeologists Find Longest-Ever Footprint Path
Intact Brain Cells Found Inside Vesuvius Victim
Now You Can Buy a Real Friggin' T. Rex
Ancient Human Footprints Could Rewrite History
Ancient Sealed Coffins Discovered in Egypt