Scientists believe that there could be a ninth planet in our solar system, lurking somewhere beyond Neptune—but don't get too excited, because this isn't about Pluto.

Rather, this is the story of a mysterious Earth- or Mars-sized planet that may have swirled beyond the asteroid belt, among the gas giants, before they ultimately swept this potential "Planet 9" toward the outer reaches of our solar system ... or even into deep space. The theory makes sense on its face: Jupiter is kind of known as a bully, after all.

That's according to two researchers from the University of British Columbia and the University of Arizona who have studied various computer simulations depicting the evolution of our solar system. Their findings are outlined in a new paper, published last month in the Annual Review of Astronomy and Astrophysics.

💫 Dive Into These Space Stories Next
Inside Percy's Mission To Hear the Sounds of Mars
2010s in Review: The Deep Space Decade
Perseverance Rover: Everything You Need To Know

In it, the scientists speculate that there's something missing in those models, like the fact that our solar system would have four gas giants in a row (Jupiter, Saturn, Uranus, and Neptune) and then no other planets after that other than small, irregular dwarf planets like Pluto.

"Logic suggests there should be some planets of other sizes, and their simulations back them up," Phys.org reports. "Adding another Earth- or Mars-sized planet to the outer solar system, perhaps between two of the gas giants, produces a more accurate model—at least during the early stages of development."

The new research focuses on the the initial position of this "Planet 9"—a common name for the loose collection of hypotheses about a potential ninth planet outside the main area of our solar system. Planet 9 could be a black hole, for instance, or it could be 10 times the size of Earth.

✅ Extra Credit: More Planet 9 Theories
A Black Hole at the Edge of Our Solar System? 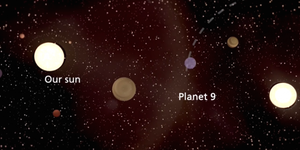 Planet 9 May Have Been Captured from Another Star

Specifically, the paper zooms in on the possibility that the four gas giants pushed Planet 9 to the outer reaches of the solar system. Planets exercise gravity on each other, which is partly why experts suspect that Planet 9 exists in the first place.

How would the gas giants shove out a much smaller, much denser planet, then? Jupiter especially already acts like a linebacker in orbit, deflecting smaller objects like comets or meteors as they approach the solar system. (This is one of many reasons a Melancholia-like rogue planet is extremely unlikely.)

The gas giants (from left to right: Jupiter, Saturn, Uranus, and Neptune) may have pushed Planet 9 to the fringes of our solar system, or beyond into deep space.
NASA

The scale of our solar system appears even larger when you consider where Planet 9 is roughly believed to exist. First, there is the inner planets zone, where Mercury, Venus, Earth, and Mars are packed relatively tightly together. After that is the asteroid belt.

From there, the scale zooms way out to accommodate Jupiter, Saturn, Uranus, and Neptune, all gas giants that are spread much further apart. Neptune may appear small among these titans (see the image above), but is still many times Earth's mass, and large enough to fit 57 Earths inside by volume.

After that is the Kuiper Belt, full of icy rocks and other small items. Pluto is the star of this so-called third zone, a huge expanse dotted by, so far, just dwarf planets and other celestial bodies like comets. This is where scientists get stuck, because it seems so unlikely that the evolution of our solar system would cough up just four very similar gas giant cores and then stop.

How do we actually find Planet 9 if it exists? These scientists posit that increasingly more powerful telescopes could bring us some closure in the near future. If not, one string theorist proposed something a little wild last year: an array of tiny probes that would blanket the third zone in order to shake loose any items—like larger planets or even the primordial black hole—that some scientists believe is Planet 9.

Correction, October 9, 2021: A previous story mistakenly referred to the asteroid belt as the Kuiper Belt. In fact, the Kuiper Belt is a disc containing comets, asteroids, and dwarf planets beyond the orbit of Neptune.

Caroline Delbert Caroline Delbert is a writer, book editor, researcher, and avid reader.
This content is created and maintained by a third party, and imported onto this page to help users provide their email addresses. You may be able to find more information about this and similar content at piano.io
Advertisement - Continue Reading Below
More From Pop Mech Pro
Oil-sniffing Dogs are Helping Humans Spot Spills
Restoring a Wooden WWII Fighter Plane
Pop Mech Pro
Advertisement - Continue Reading Below
Your Holiday Home Prep Checklist
How to Open a Locked Door Without the Key
Average Used Car Price Is Now More Than $27,500
Elon Musk Wants To Turn CO2 Into Rocket Fuel
How To Use Math To Wrap Gifts
How to Reset Your Computer (the Safe Way)
Drug Smugglers Have Their Own 'Narco Subs'
USS Thresher Was Doomed From the Start—Here's Why