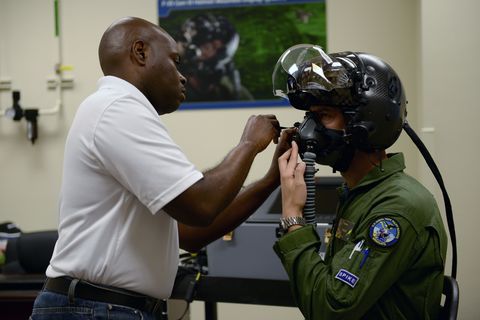 The latest version of the F-35's "magic" helmet, which allows wearers to "see" through the skin of the plane, is now being issued to pilots. The new helmet apparently fixes existing software and hardware bugs and is reportedly big improvement over previous generations of the helmet, which had been marred with problems.

The Helmet Mounted Display System (HMDS) is a key part of the F-35 Joint Strike Fighter. The helmet incorporates LCD displays to take input from the aircraft's various sensors—radar, infra-red, and the electro-optical targeting system—and overlay them on the pilot's field of view.

This means the HMDS can do some pretty neat tricks. The biggest one is the pilot's ability to "see" through the plane; the pilot can look down at his feet, for example, and the view from of the infra-red camera on the bottom of the plane will be projected onto his helmet visor—in effect giving the pilot x-ray vision. The F-35 has six such cameras, all forming the so-called the Distributed Aperture System.

The helmet visor can project other things, including digitally zoomed-in night vision from the fighter's electro-optical targeting system, icons to depict threats and targets in the air and on the ground, and the aircraft's own weapons. The F-35's forward looking infra-red sensor can project sensor video in a "picture-in-picture" against the ground and sky.

The third-gen helmet is still not without its problems. According to DefenseNews, the helmet's 5.1 pound weight contributes to a safety issue when the pilot ejects from the plane. The Air Force says there is an "elevated risk" for pilots weighing between 136 and 165 pounds to sustain neck damage, and pilots weighing less than 136 aren't allowed to fly the plane at all. The contractor, Rockwell Collins, is working on producing a lightweight version of the helmet, with a safe weight considered 4.8 pounds or less.

And finally, there's cost: each helmet costs a whopping $400,000. Those in charge of the F-35 program claim it's not just a helmet but a "workspace" for the pilot, in some ways like the screen of your laptop, where data is blended together, shared, and acted upon. Regardless, that's quite an expensive "workspace."

The third-generation helmet was actually available last year but is only hitting the F-35 fleet now as a new batch of aircraft roll off the assembly lines. Future generations are a sure bet, as the helmet is designed to accept upgrades down the road.

Rockwell Collins, the contractor responsible for the helmet, has a demonstration video here:

This content is imported from YouTube. You may be able to find the same content in another format, or you may be able to find more information, at their web site.
Kyle Mizokami Writer on Defense and Security issues, lives in San Francisco.
This content is created and maintained by a third party, and imported onto this page to help users provide their email addresses. You may be able to find more information about this and similar content at piano.io
Advertisement - Continue Reading Below
More From Weapons
Man Wedges Anti-Tank Shell Up His Butt
Could U.S. Missiles Tip a War in Ukraine’s Favor?
Advertisement - Continue Reading Below
How the U.S. Military Could Intervene in Ukraine
Inside the U.S. Army's New Laser Defense Strategy
Created for From Popular Mechanics for Created by Popular Mechanics for
KBR Inc
China’s Hypersonic was Really Weird
Why the F-35 Is Getting Nuclear Bomb
The Army Is Learning How to Fight Drones
Military Drones Autonomously Attacked Humans
Combat Drones Ended a Decades-Long War in 44 Days
North Korea Is Slapping Nukes Onto Submarines