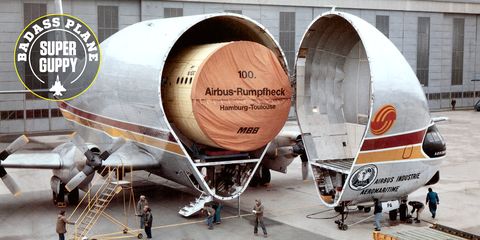 The air traffic controllers were so doubtful that the plane would even get off the ground that they notified police and fire departments to be on alert. But the Super Guppy proved them wrong.

On September 19, 1962, the bizarre new aircraft took to the skies near Los Angeles. When former Air Force pilot Jack Conroy took off and safely landed this specially modified hulk of a plane without a hitch, he inaugurated a new age of airborne transport lead by Aero Spaceline's Guppy family of aircraft.

This shiny silver monster, then known as the Pregnant Guppy, looks more like an airship than an aircraft. It's the epitome of the design philosophy "go big or go home." Today, despite being fifty years old, this frankenplane can still transport monstrous cargo, even outmatching the C-5 Galaxy by volume. Along the way, that cavernous cargo space would make the Guppy an indispensable part of humanity's journey to the Moon.

Birth of a Frankenplane

Today's Super Guppy is only the latest iteration in a series of specially-built aircraft made by Aero Spacelines, Inc. Its nickname "Frankenplane" is a literal one, because the the Guppy is actually made of elements from other aircraft.

The idea was hatched one evening in 1960 when Conroy was talking with aircraft broker Leo Mansdorf, who had just acquired a number of old Boeing Model 377 Stratocruisers that he hoped to resell. The propeller-driven Stratocruiser, based on the B-29 bomber, had been Boeing’s first post-war airliner and was now obsolete thanks to new jet aircraft like the Boeing 707.

Conroy had heard that NASA was transporting components for future spacecraft from manufacturers on the West Coast to launch sites on the Eastern seacoast. This was usually a laborious journey via the Panama Canal, taking at least 18 days. Instead Conroy wanted to stretch and expand the Stratocruiser's fuselage to transport rocket boosters and other bulky space hardware by plane.

It was a crazy idea. Most of the people who looked at it said the thing would never fly with one NASA official saying the design looked like a pregnant guppy—the name stuck. But Conroy was determined, he mortgaged his house to create Aero Spacelines International and began modifying the first Stratocruiser.

Pregnant Guppy before being loaded with Gemini V spacecraft in mid-1965.
A. Y. Owen/ The Life Images CollectionGetty Images

Two years later, after the Pregnant Guppy had flown at Van Nuys, Conroy obtained special permission to fly the uncertified aircraft to NASA’s Manned Space Flight Center in Houston for a demonstration. Permission was given but required him not to fly over population centers.

NASA officials were dubious that this ungainly aircraft (which they had not requested) was safe enough to transport they're expensive cargo. Although the Pregnant Guppy was only 3,000 lbs. heavier than the original Stratocruiser, the aerodynamics were far worse, and the cruise speed was reduced by extra drag.

Conroy appealed personally to the MSFC’s Director, space scientist Wernher von Braun. Von Braun insisted on going up himself for a test flight, where Conroy showed him the plane’s ability to fly and remain stable even with two of its four engines out. Von Braun was sold.

The Pregnant Guppy cut the delivery time from factory to the launch site from 18 days to 18 hours, and immediately began transporting components for the Gemini space program. In fact, NASA says they would not have been able to get a man on the moon by 1969 without the help of the Guppy.

The Pregnant Guppy was made from not one but two Stratocruisers, with a section of fuselage sawed off one and added to another to stretch it by sixteen feet. The custom-built cargo bay was nineteen feet in diameter, sized to carry stages of the Saturn V rocket.

To access the Pregnant Guppy’s cargo bay, the entire tail section (basically the rear half of the plane) was unbolted and rolled back on a wheeled trolley, and getting the two sections to join up again was not simple. Fred Austin, a Pregnant Guppy Loadmaster in the 60s, says that usually it was just a matter of moving the trolley backwards and forwards, but on one occasion when the tail section was brought forward again it was out of alignment. Getting the two to rejoin took some time.

After that the trolley was fitted with tillers, so the tail section could be steered easily into place each time.

The Super Guppy also benefited from upgraded engines, which are the same as those in Lockheed's P-3 Orion anti-submarine aircraft, though its cruising speed of 250 mph is sluggish by modern standards. The propellers come from Lockheed's C-130 Hercules, and the nosewheel is from a Boeing 707—a true frankenplane.

Unlike its predecessor, the Super Guppy loads in the front with a nose section that swings open 110 degrees. Opening requires a series of cables and locks to be disengaged in the proper sequence, and getting it closed again is ”definitely an art,” according to Guppy flight engineer David Elliott. This is because the change of weight makes it difficult to align the locking pins, resulting in what Elliott terms an “interesting” situation.

While the C-5 Galaxy (also a badass plane) can carry four times more weight at over 200,000 lbs., the Super Guppy wins by volume. Its payload bay is 25-feet high, 25-feet wide, and 111-feet long. That gives the Super Guppy a whopping 39,000 cubic feet of usable space, compared to the C-5’s 35,000. While the C-5 may be the go-to carrier for heavy loads like main battle tanks, the Super Guppy can taker bigger, relatively light cargo like space components.

Even the Antonov-225, the world’s biggest cargo aircraft cannot take some of the loads which the Super Guppy can haul, because its cargo bay is "only" 15-feet high.

It’s What’s Inside That Counts

After carrying boosters and other components in the early days of the space race, Airbus used four Super Guppies starting in the early 1970s to carry airliner components for assembly in their base in Toulouse, France. Airbus later built their own cargo plane for outsize loads, the A300-600 ST Super Transporter, generally called Beluga, a design that's very similar to the Guppy.

After working a spell for the European Space Agency, the Super Guppy was sold back to NASA, and began transporting elements of the International Space Station to the launch site. In 2016 it took the Orion spacecraft, and this year it carried the Crew Module for NASA’s Exploration Mission-1, due to blast off in 2020, as well as newly restored parts historic Mission Control in Houston.

The Super Guppy has been used for plenty of other missions as well. It often transports NASA's T-38 trainer jet, and other loads have included DH-10 airliner fuselages, an entire SH-3 Sea King helicopter, Rockwell’s prototype XFV-12A vertical takeoff and landing prototype, and a ‘large composite structure’ as part of NASA’s PRSEUS program.

While these Guppies have found success in the small niche of aerospace transport, it wasn't enough to keep Conroy's business airborne.

“Airlift your boat, trouble free and damage-free, to your delighted customer,” runs one Aero Spacelines sales brochure, with a photo of a substantial vessel packed snugly aboard a Guppy. But the company had no luck with the wider market, and only one Pregnant Guppy and five Super Guppies were ever built. Conroy ceased operations in 1972.

The lack of a production is one reason why a section of the airframe of the original Pregnant Guppy was cannibalized, and is part of NASA’s sole remaining Super Guppy.

The Super Guppy was built in the 1960s and it remains a 1960s aircraft—without any modern electronics. Flying with a crew of six or seven: two pilots, two flight engineers, a load master, and one or two maintenance technicians.

Most aircraft do not need flight engineers to control engine power levels but managing the heavy engine levers is not practical at the same time as wrestling with the controls, which lack the power assistance of more recent rigs. In addition, the Super Guppy control layout does not allow the pilot to see all the controls, so engineers are mandatory.

NASA's single Super Guppy is based at Ellington Field near the Johnson Space Center, and the space agency has no plans to retire or replace the plane, stating that it offers “fast, economical transport for outsize cargo….provides flexibility in transportation planning, virtually removing constraints such as railroad and highway overpasses, long time legs, such as barge or sea transport, and transport to or from remote regions.”

It may be old, awkward, and even a little bit ridiculous, but the Super Guppy remains an irreplaceable, badass flying warehouse.

NASA /MSFC/Emmett Given
This content is created and maintained by a third party, and imported onto this page to help users provide their email addresses. You may be able to find more information about this and similar content at piano.io
Advertisement - Continue Reading Below
More From The Most Badass Planes
Why The B-2 Is Such a Badass Plane
Why the F-16 Is Such a Badass Plane
Pop Mech Pro
Advertisement - Continue Reading Below
The F-14 Tomcat Was a Warfighter Without a War
Pop Mech Pro