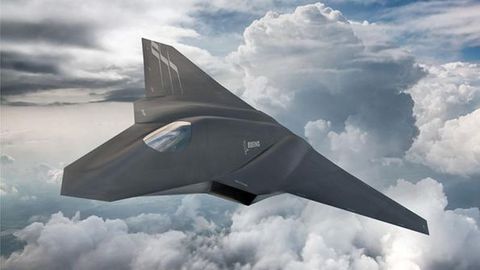 By now, we've gotten accustomed to sticker shock when it comes to the cost of brand-new bombers and fighter jets (hello, F-35). But the plane that would replace both the F-22 Raptor and F-15 Eagle could reach a staggering cost of $300 million per plane.

That figure comes from a new study called “The Cost of Replacing Today’s Air Force Fleet," which was published by the non-partisan Congressional Budget Office (CBO) and first reported by Defense News. The report attempted to calculate the future cost of Penetrating Counter Air (PCA), which is the current name of the U.S. Air Force’s next superiority fighter jet.

PCA is meant to replace the current fleet of F-22s and F-15s, taking its place as the service’s dedicated air-to-air fighter when it enters service in 2030. Unlike the Air Force's F-35A, which is meant to carry out both air-to-air and air-to-ground missions, PCA will be focused solely on the skies, optimized to fight and win against current and future aerial threats including the Russian Sukhoi Su-57 and China’s J-20 fighter.

The CBO estimated that the Air Force would require 414 new fighters in total. The office estimates the per-unit cost of the PCA fighter at $300 million. For comparison's sake, the F-35A Joint Strike Fighter costs $94 million apiece at the time of publication.

Why so expensive? For starters, the PCA will need capabilities far beyond the planes it replaces. For example, the next-gen fighter will need an even more powerful radar than the F-22’s AN/APG-77 active electronically scanned array radar in order to detect enemy stealth fighters. (When the F-22 was first fielded there were no enemy stealth fighters on the horizon). PCA will also need greater stealth, particularly against low frequency radars. One design characteristic that might make PCA more stealthy than her predecessors could be the lack of a vertical stabilizer, like the B-2 Spirit bomber (see Boeing's concept art at top.)

Another feature of the new fighter lies in the name: the fighter will be optimized to penetrate enemy airspace. The return of big power warfare—and the need to infiltrate large, complex national air defense networks like those in Russia and China—will place a premium on long range. PCA could escort the Air Force’s new B-21 Raider bombers on long-distance flights deep into enemy territory, swatting away enemy interceptors so the bomber crews can hit their targets and return home. Longer flights over hostile airspace will also drive the need a larger internal weapons bay to accommodate more air-to-air missiles than the F-22 Raptor.

All of this means that PCA will be a bigger jet than the F-15 or F-22. Stealth aircraft can’t carry external stores such as weapons and fuel, as hanging things off the wings and fuselage ruins a warplane’s radar-evading profile and makes them easier to detect. Weapons and fuel must be stored within the airframe, increasing internal volume.

Plus, stealth isn't cheap. The CBO warns that: “Other stealthy aircraft, such as the B-2 bomber and the F-22 and F-35A fighters, have experienced cost increases that resulted in lower production rates and decreased total purchases. Containing costs for the PCA aircraft may be similarly difficult.”

This astronomical price tag could become a serious problem for the Pentagon. The Congressional Budget Office warns that the PCA jet could become so expensive, “the Air Force could decide that the PCA aircraft’s cutting-edge design is unaffordable and instead opt to purchase more F-35As.” Alternately, the Air Force could choose to modernize the F-22 airframe with newer F-35 electronics, as Lockheed Martin has proposed doing for Japan.